Increasing amounts of data have made graphical representations essential to the analysis of scientific simulations and experiments. Although there is presently no universal and efficient tool for three-dimensional data, Python is capable of scientific visualization. In this poster session, we present three applications, ranging from simple ball-and-stick molecules to complex volume rendering. 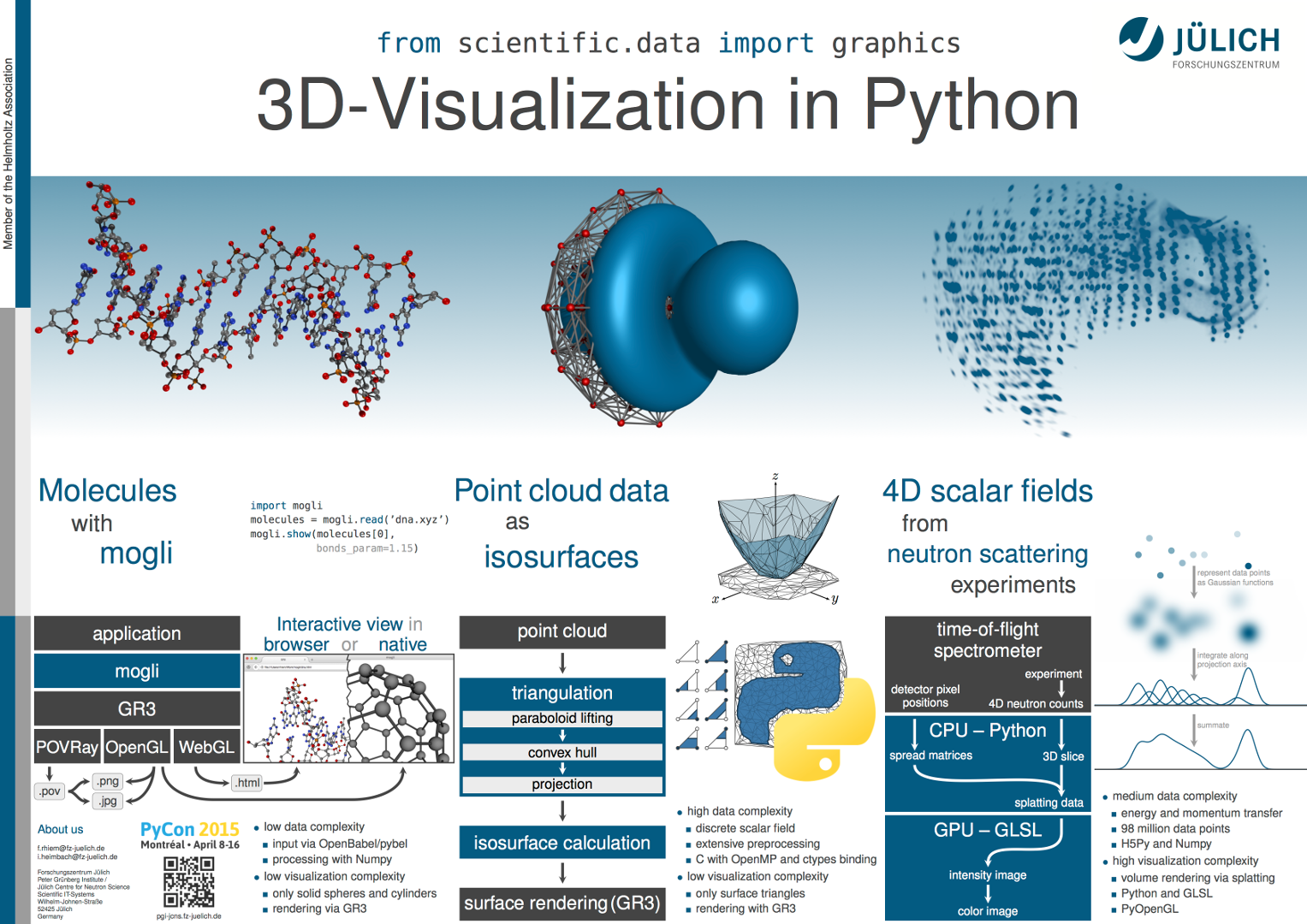 Scientific simulations and experiments often generate results that can only be interpreted with the help of computer graphics. Even though Python packages do exist for three- or higher-dimensional data visualization, they are either limited to specialized applications or too general and thus inefficient.

In this poster session we present three applications that demonstrate the visualization capabilities of python and show why problems of different types require different approaches. Since still images cannot fully represent interactive applications, the poster will be accompanied by live demonstrations.

The visualization of molecules is a common problem and involves neither complex data preprocessing nor elaborate graphics. Based on GR3 and the GR framework, mogli serves as an example of the typical ball-and-stick representations. These can be achieved with existing tools, and developing an end user application requires comparatively little effort.

However, this is not the case for the visualization of Fermi surfaces, atomic orbitals, and other implicit functions defined on unstructured point sets. The resulting surfaces can easily be rendered, but their computation from raw data requires complex and time-consuming algorithms.

In analyzing neutron scattering experiments, we do not focus on the rather simple data preprocessing, but on volume rendering. Despite millions of rendered data points, acceptable frame rates can be achieved by utilizing modern graphics hardware.

If your browser supports WebGL, the canvas above should show a 3D rendering of a DNA molecule. Use your mouse or touchscreen to rotate the molecule! The HTML and JavaScript code for this was created using mogli and the following script:

A two-dimensional function whose values are only known on a finite set of points is to be visualized focusing on a given threshold, the “isovalue”. The video shows the approximation of the area in which this function is greater than the isovalue. Its border is called “isoline” and is therefore defined by the implicit function:

This video shows a 360° rotation of data from a neutron scattering experiment. It is a 3D slice from the original 4D data and the colormap on the right was used to render the intensity image.

If you have questions about the topic, simply send an email to Ingo Meyer or Florian Rhiem.