Two newly-qualified mathematical-technical software developers from PGI/JCNS-TA both share the title of "best student in their field in Germany". Ingo Heimbach and Florian Rhiem have each achieved 96 out of a possible 100 points in the examination given by the Chamber of Commerce and Industry; no other trainee in the whole of Germany scored so highly in the examinations in this field. The official ceremony to congratulate Germany's best students across all professions will be held on 10 December in Berlin; the speaker on this occasion is expected to be the Federal Minister for Family Affairs, Dr. Kristina Schröder. 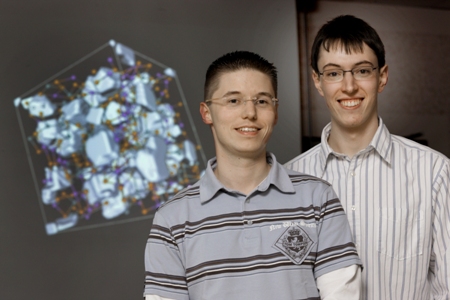 Parallel to their vocational training, Heimbach and Rhiem studied at the Aachen University of Applied Sciences, Jülich Campus, and were awarded their Bachelor of Science degree in Scientific Programming, again with the outstanding, top evaluation of "very good". The 22-year-olds are agreed that their excellent results are to a large part due to the learning environment in Jülich. "On the one hand, the scientists and trainers made very exacting demands of us, but on the other hand, we had the freedom to try out various techniques and time to apply what we had learned", explained Ingo Heimbach. "Being able to directly put into practice the theoretical material learned during our studies certainly gave us extra incentives to study hard", agreed Florian Rhiem.

They were taught the basic principles of mathematics and informatics in lectures and tutorials at the Jülich Supercomputing Centre (JSC) by the head of training Prof. Paul Jansen along with his colleagues from JSC and the University. They completed the practical part of their training in the team "Scientific IT Systems" at PGI/JCNS-TA. During this time, they improved a computer program used to calculate and visualize molecules. Scientists use the software to enable them to analyse and present three-dimensionally generated structural information. In this way they can, for instance, track so-called "cavities", or hollow spaces in crystal lattices. Ingo Heimbach optimized the operability of the program’s user interface, and Florian Rhiem the visualization of the atoms and cavities.

Trainer Josef Heinen is proud that both software developers have decided to stay in Jülich despite there being an attractive job market for their skills. Both have a third of a full position in the "Scientific IT Systems" team and at the same time are studying for a Master’s degree in Technical Mathematics. One of their next jobs will be to make the programme appropriate for use in a wider range of applications. Interest has already been shown from cooperation partners. At present, neither plan to leave Forschungszentrum Jülich: "It is hard to imagine finding a similarly challenging work environment with such fascinating assignments elsewhere", commented Rhiem.